I bet when you think of San Diego the last thing you think of is Charleston SC. Trust me, I understand why. However, you’d be really surprised at how very similar the two cities really are. Truly. I have lived 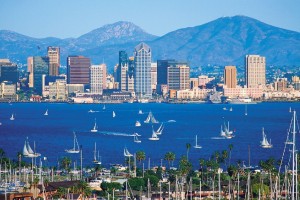 in Charleston SC since 1999, and am originally from Columbia SC. I have traveled all over this great United States, and honestly there really isn’t much like Charleston SC. I am not being biased I promise. I mean there are some cities that architecturally are very similar like: Wilmington NC, New Orleans LA, and Savannah GA (which might be the closest in a general to a lot of Charleston’s characteristics). That’s about it. After having just left from a visit to San Diego I couldn’t help but think to myself how similar the two cities are in so many ways, and in trying to give the locals of San Diego who have never been to our great city an idea, I couldn’t help but sum it up by saying “it’s kind of the San Diego of the South”.  I know you’re say WHAT??!! How is that? I’ll explain, but first you must know that like San Diego, Charleston SC is one of the United States and World’s most renowned destination cites.

Recently my wife and I visited San Diego California for a week long business/vacation get away, and had a most wonderful time. Prior to going my wife did about 5 months worth of internet research on the best dining, things to see and do that San Diego has to offer and it paid off. We had a blast. We went to their amazing zoo (like most people), ate at some of the city’s best restaurants, drank at the most famous bars, took a two hour sailboat tour through the harbor, even did a small biking excursion on Coronado Island to see the famous hotel Coronado.

We met so many kind people, almost everyone we talked to that lived there was very gracious and a pleasure to talk to. Offering suggestions and giving us their thoughts on places to go and see while visiting their great city. We ate some amazing breakfasts at the very well known Hash House– twice because it was so good, had drinks at Cafe 21 in the gas lamp area and met the nicest bartender (thanks Zane), drank craft beers at Ballast Point (had 6 different kind) and spent one morning before breakfast at the farmers market in Little Italy. Dined at The Prep Kitchen (twice that week), had happy hour drinks on top of the 5th Avenue Financial Center at Bertrand at Mister A’s which has the MOST amazing views of the entire city while airplanes fly by you, and raved for the food at Cucina Urbana restaurant. You get the point by now. We had a great time.

I bet you’re thinking let’s get to the nitty gritty as to why you think they’re so similar. I call Charleston SC the “San Diego of the South” for many reasons beyond just being popular tourist cities, but truthfully that does have a lot to do with it.

It should be of no mystery that Charleston SC is one of, if not the most kind hospitable town in America; well at least it was for 13 straight years as voted by the world’s most respected tourism magazines. We found the people we met in San Diego to be so welcoming, kind, and accommodating so much so that it instantly reminded me of home. Unfortunately, we did have an Uber driver (had never even been to S.C.) that made a ignorant “stereotype type” comment about South Carolinians I wasn’t happy about. That’s ok, there’s one in every bunch as they say.

Both San Diego and Charleston South Carolina are coastal cities, with a military base(s) and military life influences to which if you live in a city that has a large military population you’ll understand.  Although Charleston SC is considerably smaller it is one of America’s most respected and well known “foodie”, and culinary destination cities according to the most well respected chefs, dining critics and media outlets. As does San Diego. I think it’s safe to say we don’t have near as many eating and drinking establishments as San Diego does, but I wouldn’t be surprised if the Charleston SC tri-county area has as many well publicized restaurants as San Diego.

Both cities also are heavily reliant on tourism for a large portion of their cities revenue streams, and both cities have a very young, “hip”, fun, and diverse population most of which aren’t in fact from the area. Mostly transplants from around the United States and world that made the cities their home after visiting. Charleston unlike any other major city in SC (there are only 3), is mostly comprised of people not from Charleston. Likewise, almost everyone we met who lived in San Diego was not from San Diego. Many people from around the United States have a tendency to want to lump California into the same “stereotype”, as liberal, sometimes weird, and sometimes fake. That maybe the norm for some cities in California, but San Diego does not fit that mold at all. The city makes you feel like you’re in a small normal everyday American town that could be anywhere in the U.S. Our lovely cocktail waitress at Cafe 21 summed it up perfectly when she said that locals characterize San Diego in one sentence, “the biggest small town in America“.

Both areas have beautiful beaches to enjoy, but unlike San Diego one thing we do have they don’t is warm waters to enjoy almost year around whereas you need a wet suit most of the year in almost all of California.